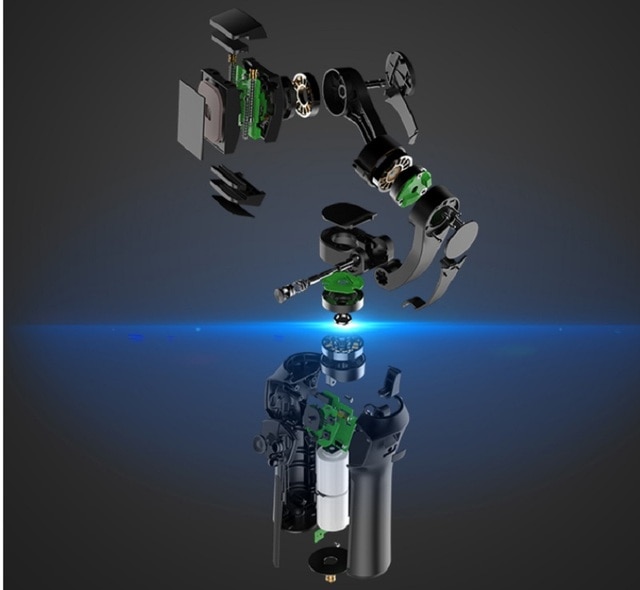 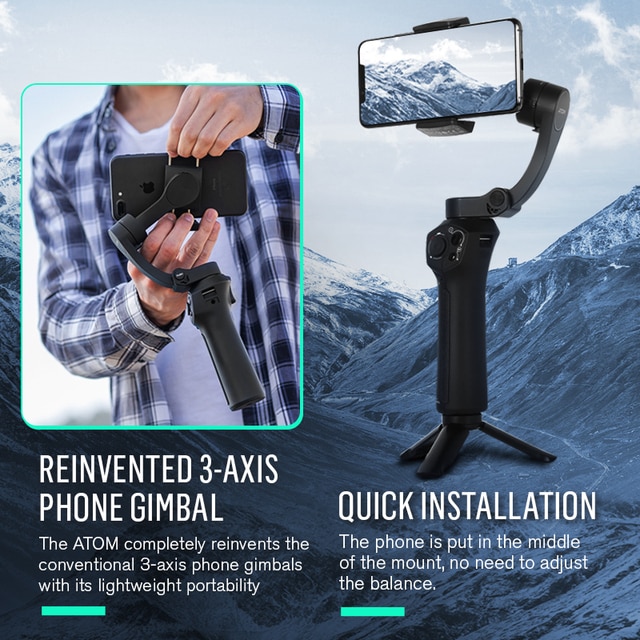 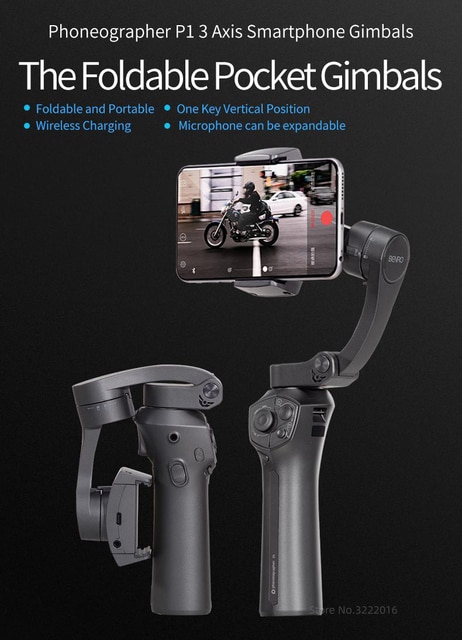 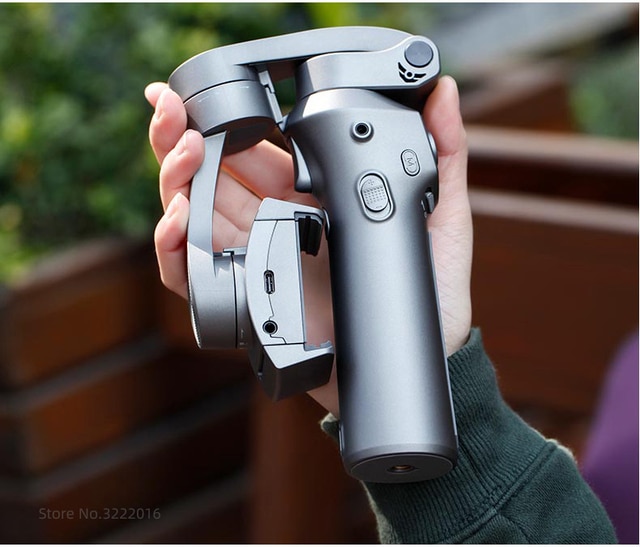 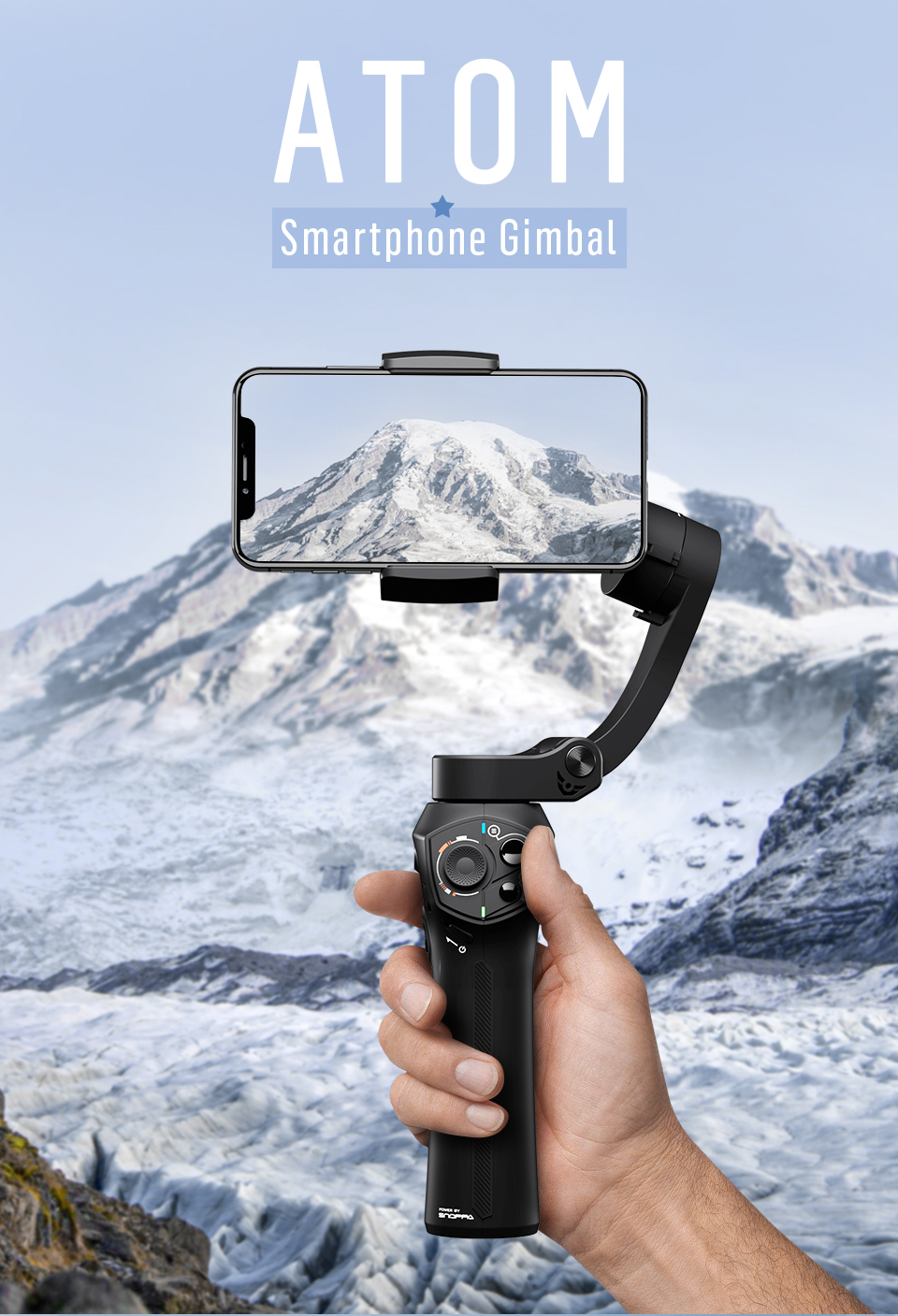 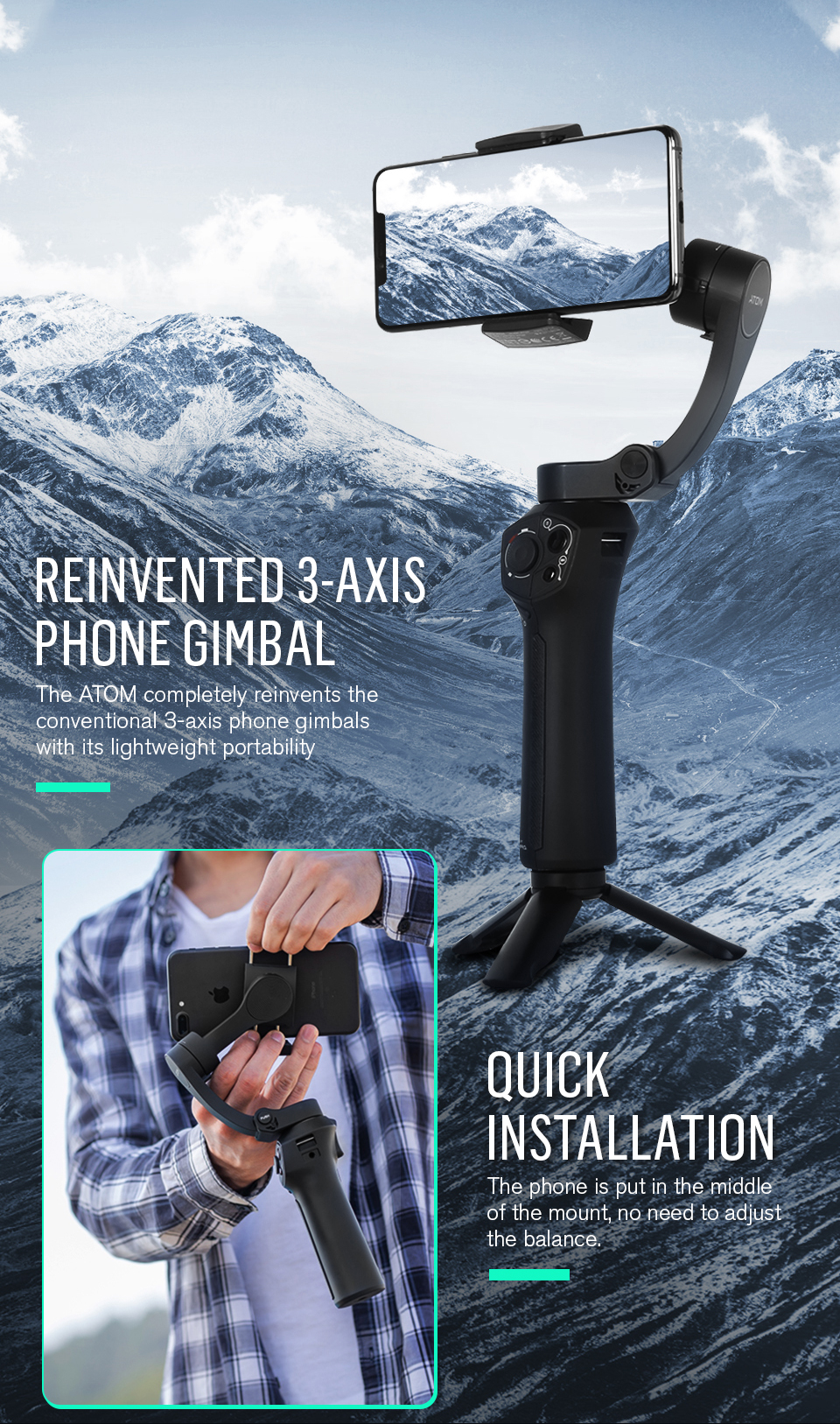 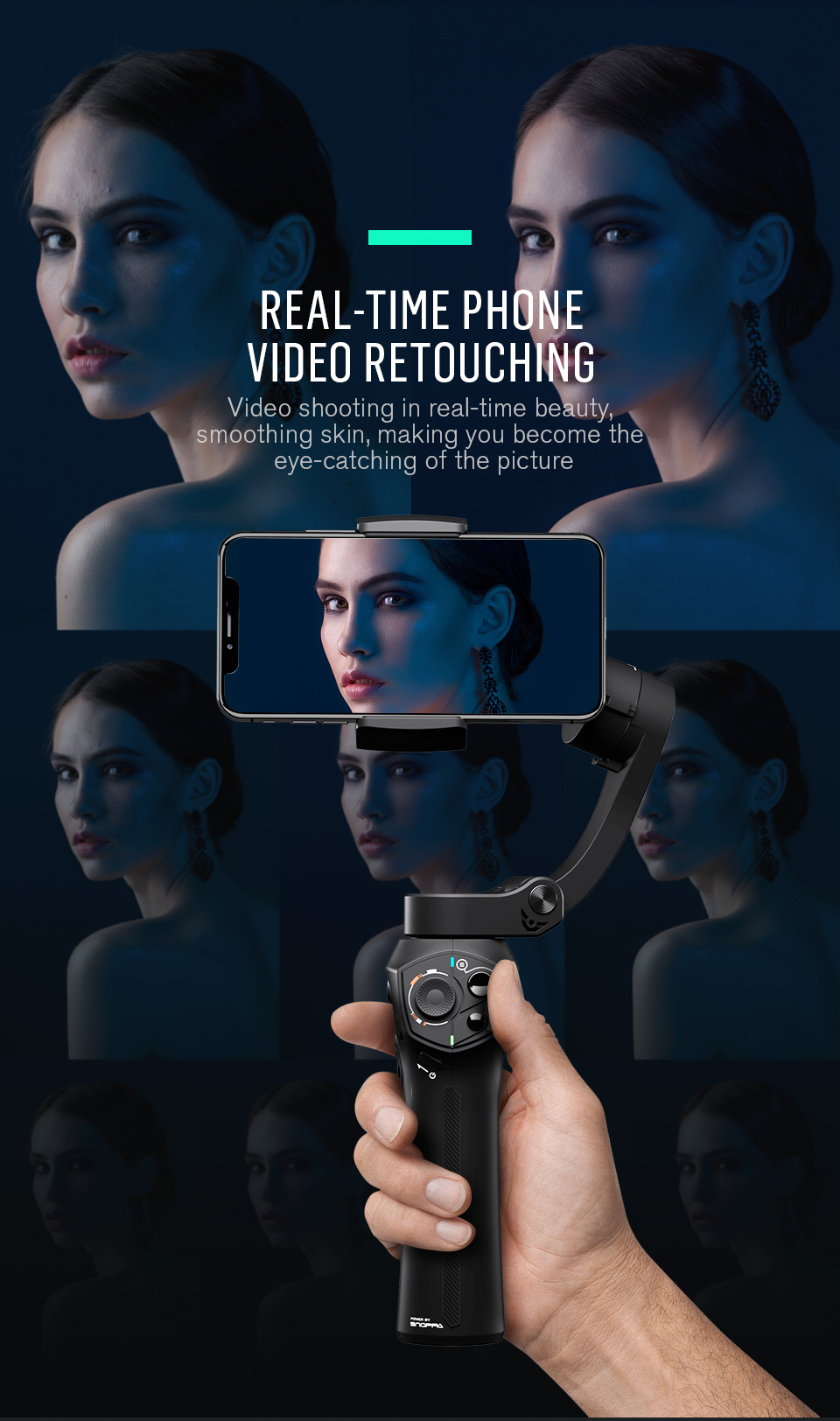 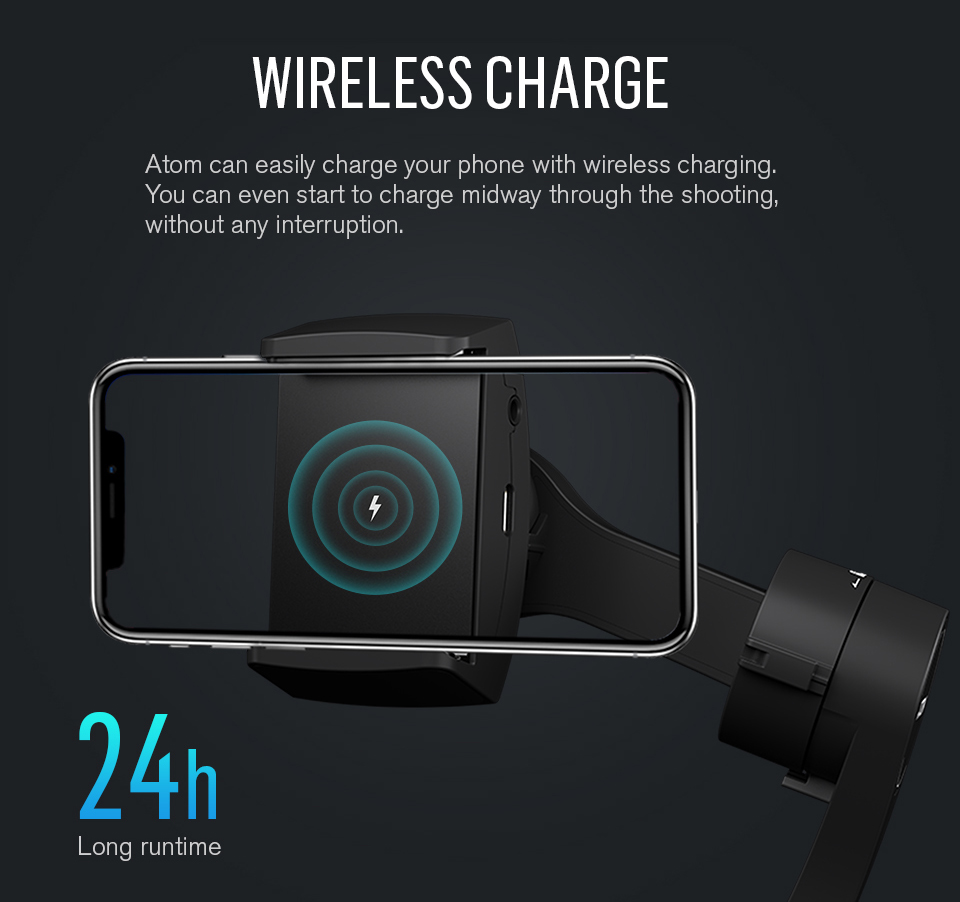 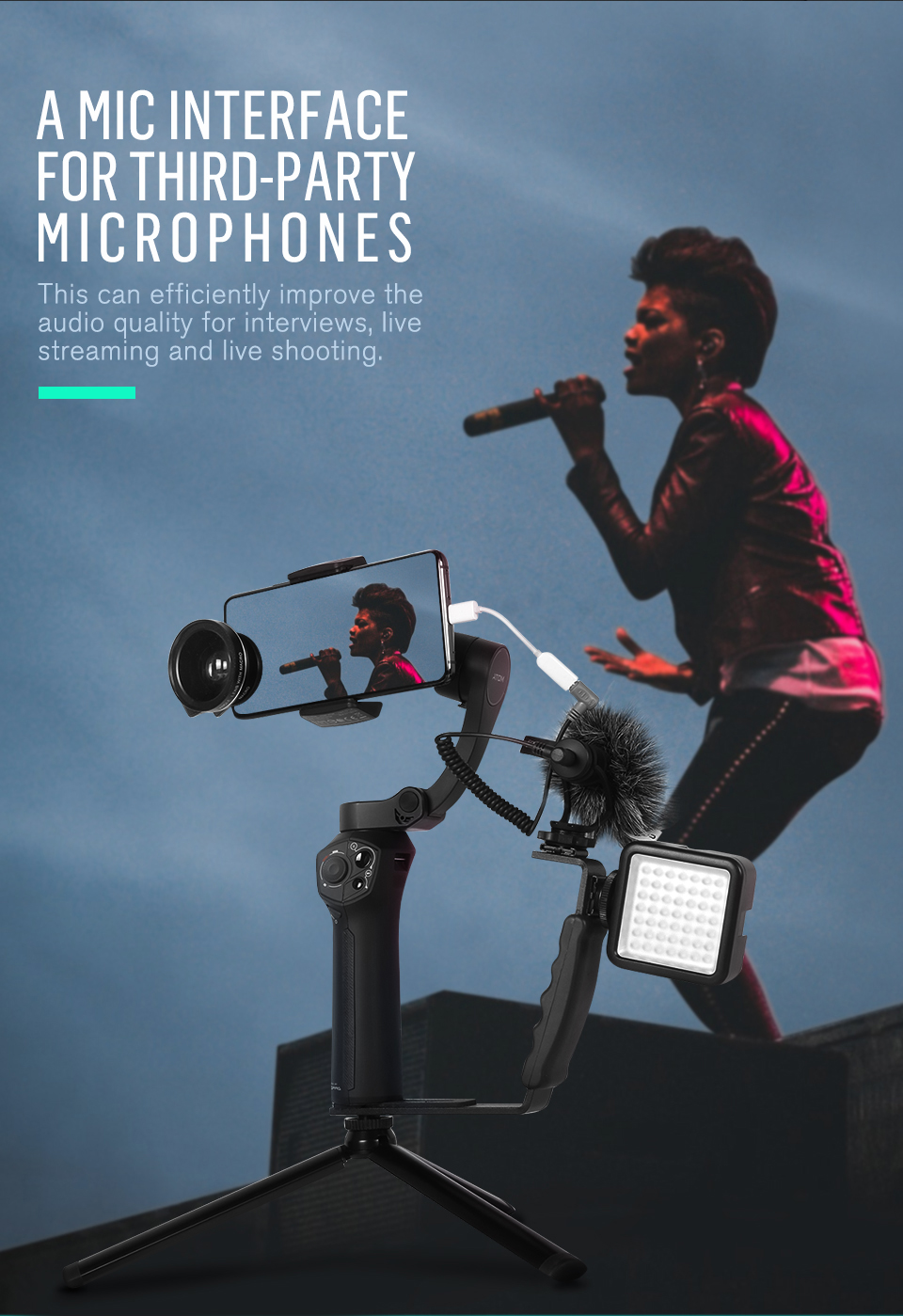 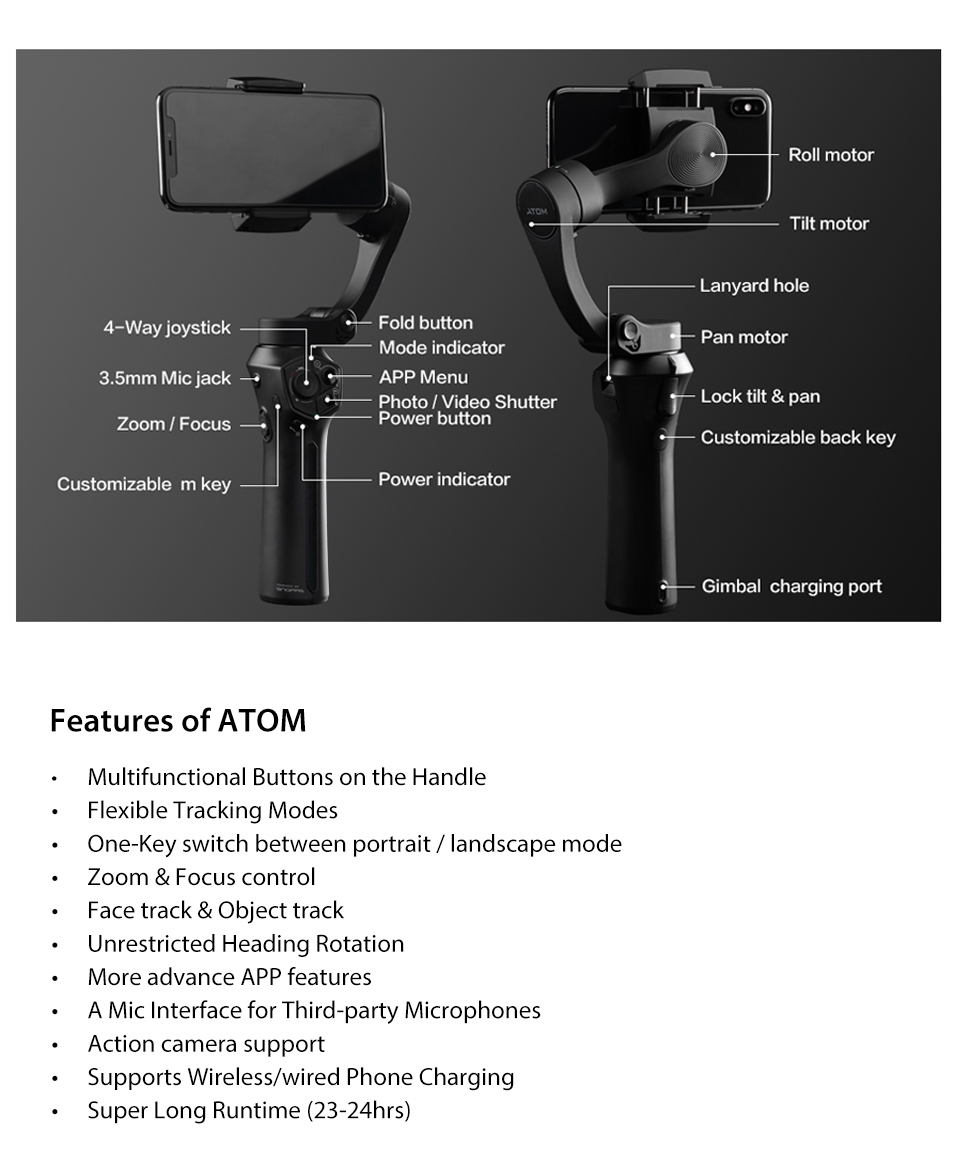 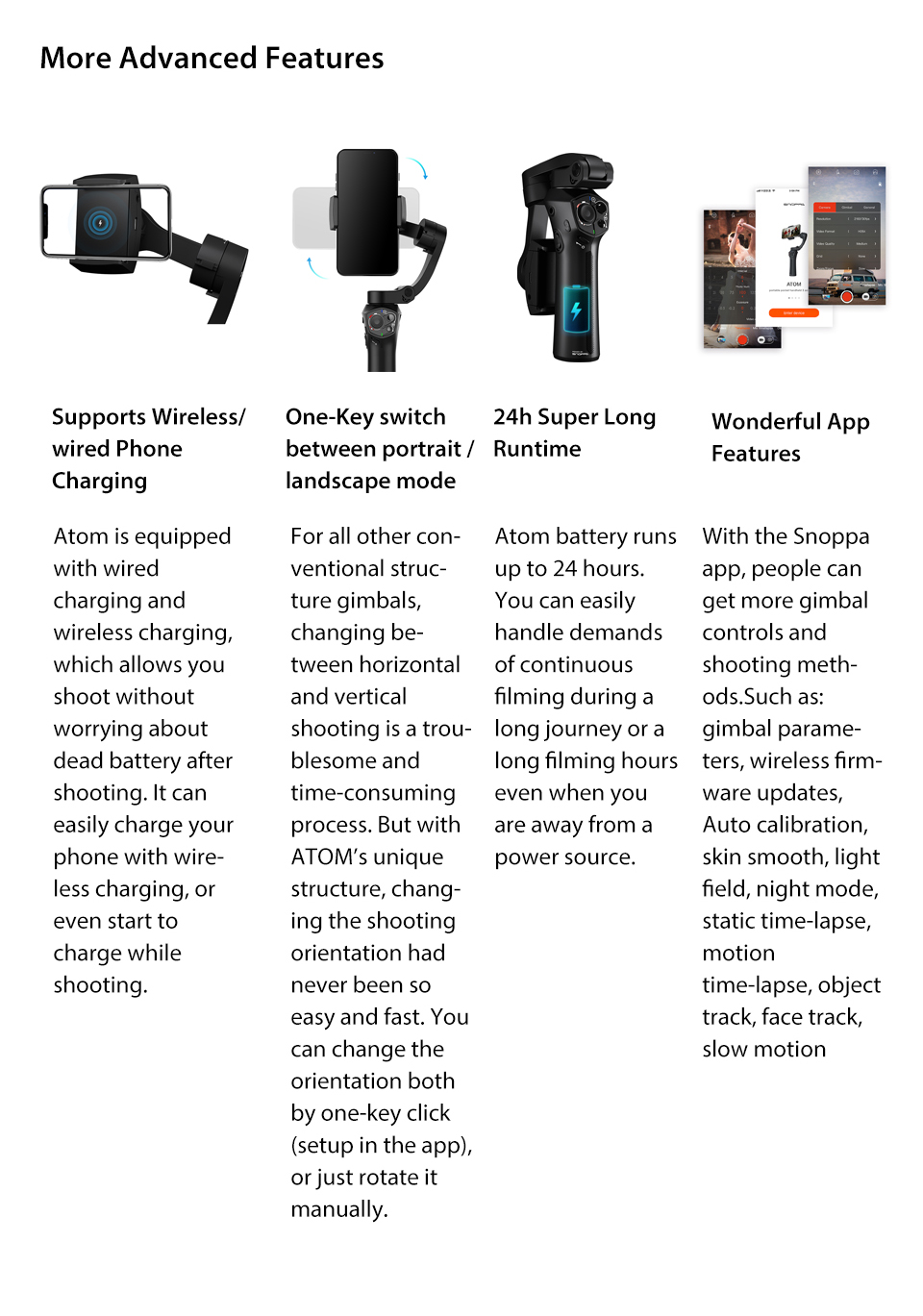 A Mic Interface for Third-party Microphones

Snoppa app is available for Version iOS 8.0 & Android 6.0 or Higher.

(^o^)/ If you are an ANDROID user and can not stand some bugs in the App before it become perfect for your smartphone, contact the seller before the purchase to make sure you will get the function you need.

Atom is coming as the super portable 3-axis gimbal with its unique folding structure. More than a half size can be saved to make your travel more easy and enjoyable.

In comparison with other conventional phone gimbals

Motors in conventional phone gimbals are not big in order to keep a relatively small size and light weight, and normally those gimbals just have a payload around 220 gram.

If they want to increase the payload, they would have to make the motors larger, at the price of sacrificing the using experience due to the larger size and heavier weight.

Thanks to the ATOM’s unique structure, ATOM can reach a high payload of 310 gram which is presently the highest in phone gimbal category, without the need to use larger and heavier motors and the body remains light weight and compact size.

Multifunctional Buttons on the Handle

ATOM’s handle gathers a rich set of buttons that you can use to control almost all the functions of the gimbal and Snoppa App. And almost all the shooting operations can be done with one hand.

According to different contexts, you can easily adjust the motion sensitivity of Atom. The three tracking modes can be switched with just one button.

2. Hold the trigger button to instantly lock the orientation to ensure the footage is stable

3. Click and hold the trigger button to set the gimbal into the fast track mode for tracking fast moving objects

For all other conventional structure gimbals, changing between horizontal and vertical shooting is a troublesome and time-consuming process.

Thanks to ATOM’s unique structure, changing the shooting orientation had never been so easy and fast.

You can change the orientation both by one-key click (setup in the app), or rotate it manually.

The ATOM integrates plenty of control buttons, including a customizable slide button on the side. In the app you can freely define the slide button with zoom or focus function as per your need.

Atom uses a heading motor that can be rotated without infinity. There’s no dead angles when shooting dynamic time-lapse video. When performing face tracking or object tracking, there is no need to worry about the target exceeding the rotation range of the gimbal.

With the dedicated app, people can get more gimbal controls and shooting methods

A Mic Interface for Third-party Microphones

Great movies have memorable sounds. That’s why Atom creatively built in a mic interface for third-party microphones. This can efficiently improve the audio quality for interviews, live streaming and live shooting.

The ATOM is mainly designed for phone filming, but it also can be used for action cameras like GoPro Hero 4, 5, 6 series.

1Mount with an adapter

2. Mount directly onto the phone holder

All the ordinary 3-axis phone gimbals use the orthogonal structure, and have two typical problems:

1. Mounting the phone is quite troublesome and time-consuming that people need to balance the phone before startup by adjusting the motor arm.

2. The side motor would hide the phone’s charging port (and sometimes the mic port too)

How does the Atom behave

On ATOM, we creatively invent a non-orthogonal structure with the oblique arm. In this unique structure, the side motor will not hit the bottom of the phone any more and leaves the phone a large movement space.

Atom is equipped with wired charging and wireless charging, which allows you shoot without worrying about dead battery after shooting.

Atom can easily charge your phone with wireless charging. You can even start to charge midway through the shooting, without any interruption.

If your phone does not support wireless charging, Atom’s wired charging is outstanding as well. You might think if the phone mounting and gimbal stabilization would be affected by the charging cable. Let me tell you something, thanks to its unique structural design, Atom can perfectly avoid these problems.

Atom battery runs up to 24 hours. You can easily handle demands of continuous filming during a long journey or a long filming hours even when you are away from a power source.

In addition to the unique exciting features, the ATOM also have a lot of thoughtful details which help to get a better user experience.

There’s a lock on each motor arm, which can prevent the arm from moving around when the gimbal is closed.

Some mobile phones have keys in the middle part of the side, which could easily cause problem when attach the phone to the gimbal phone holder.

ATOM effectively solve this issue by designing a slot in the rubber griper.

With the dedicated app, people can get more gimbal controls and shooting methods

There are no reviews yet.